Need some help? Call Us 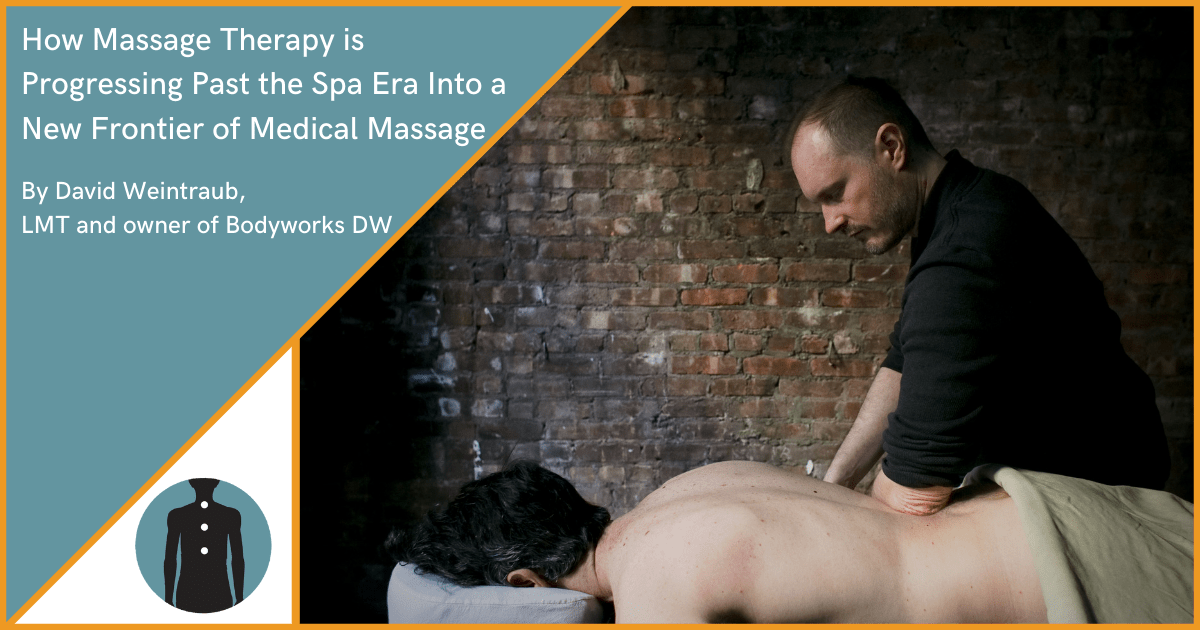 The Rise of Medical Massage in New York City

David Weintraub LMT & Owner at Bodyworks DW writes about how massage therapy has shifted during his career and how he and his colleagues are pushing the envelopes of what’s possible with massage!

A lot has changed in the 12 years since I graduated massage therapy school. And started practicing medical massage in New York City. When I attended the Finger Lakes School of Massage (FLSM) in 2007, I was part of a very small minority of potential therapists interested in learning medical massage. Our school was one of few programs that taught myofascial release as a major part of it’s program. Larger schools such as Swedish Institute focused almost exclusively on Swedish massage and shiatsu (aka acupressure).

FLSM offered direct training in medical massage and myofascial release techniques. This was one of the main reasons I left NYC and moved to Ithaca for 6 months to attend. FLSM’s program was intensive. 6 months straight working 9-5 monday through friday. Plus many additional hours each day of study and hands on clinic work. Here’s a fun fact to give you an idea of how intensive the program was.

We had to learn the names, locations, and bony landmarks of all 206 bones in the body by day 3!

This was so we could spend the next several months of kinesiology class learning nearly 600 muscles. Including their attachment points and functions. All while practicing Swedish, Shiatsu, Myofascial release, medical massage, sports massage, prenatal massage, energy work. And several other massage modalities you’ve probably never even heard of. Basically if you didn’t spend at least an hour a night studying to retain the day’s information dump, you quickly fell way behind.

The basic job market in New York City was almost entirely spa based. Occasionally a therapist could get a job working for a chiropractor or physical therapist. But those were few and far between. And not given to fresh graduates. While some individual practitioners had medical massage practices noone had build a medical massage studio in NYC yet.

When I graduated in late May of 2007 I wasn’t able to work in New York State immediately. Graduating gives you a certificate, but you still need to take a board exam to get a license. At the time, however, not all states required licensing in order to work (they all do now). Pennsylvania was one that didn’t and a spa named The Lodge at Woodloch had come to our school job fair. I figured I might as well work on clients while studying for the NYS boards. That way I’d keep up my hands on skills, gain immediate experience, and maybe even make a bit of $.

I applied at the Lodge at Woodloch in June. Got the job and packed up my car and moved my meager belongings to a new city from Ithaca. I moved to a small rental studio in Hawley, PA, a small rural town with about 5,000 residents. Can you say “culture shock?”

My First Day on the Job = trial by fire

My boss told me she’d keep my first day on the lighter side. Seeing as the most I’d even done in one day in school was three 90 minute sessions. I had four 60 minute session on my schedule when I arrived at work that morning. In the middle of my 2nd one, she called my studio room. And asked, “how do you feel about doing a floor shiatsu session?” I said sure and saw my schedule expand to five 60 minute sessions.

During session three, I got another call asking, “how about prenatal, are you comfortable doing those?” I said sure and watched my schedule expand to six sessions. By days end, another floor shiatsu session was added for a grand total of seven 60 minute sessions. So much for taking it easy on the newbie, right!?

I wound up working 3 days a week with 6-7 sessions per day for the next two months. Needless to say, I had to learn really fast how to manage my body mechanics and technique. In order to not hurt myself and burn out.

All while studying a minimum of an hour a night to prep for the state board. So I could legally work in New York State and get myself back to my NYC home.

Obviously, I passed my exam. Otherwise I wouldn’t be here still working as an LMT 12 years later 🙂

The NYS exam is given twice a year, in late February and late August. It’s a 140 multiple choice question test given by proctors with no additional materials allowed in the room except you and a couple of #2 pencils. They were quite insistent on the #2 pencils! The room was freezing cold and you had 2 hours to finish. If you are at all curious as to what’s on the test, click here.

A Brutal Test and a Nail Biting Wait

Once the test is over you have to wait 5-8 weeks for the state board to post results online. Whether you can work in the field or not is entirely based on passing it with a 75 or higher. Failing means you have to wait 6 months to retake it and can’t work in the meantime. If a 75 seems low to you…I’m someone who is an extremely good test taker and studied an hour per day for 3 months for it. I got an 87.

It’s designed so that you only know several broad categories of information to study and you don’t know what specific info from each category will be tested. Nobody gets 100 on it it. Highest score I ever heard of for our year was a 93. She spent 3 hours a day studying!

If it’s late September, anyone you know who has taken this exam will be obsessively checking the state website to see if they have been licensed. And can finally start working in NYS! On October 3rd 2007, my results got posted. Immediately I started applying for jobs. And wound up getting hired by two spas. Equinox in Brooklyn Heights and a place called Providence Day Spa nearby in downtown Brooklyn. I worked 3 days a week at each.

I was lucky to land at Providence Day Spa for my first of two jobs back in NYC. The owner, Providence, was an LMT herself with 19 years of experience. Once she saw that I was retaining clients by trying something different than full body Swedish massage, she let me do my thing with encouragement. I worked on enrolling clients during intake to let me focus on relieving their pain and leave out some areas of the body.

I also learned to explain during outtake that layering focused sessions to work on different areas of the body would yield the best long term results. Not all clients went for it and some simply wanted a full body spa massage. The ones who did though, started seeing their pain go away for the long term. And then sending all of their friends to work with me.

Over the next 3 years I refined my craft. My work is bridge between traditional focused medical massage and Rolfing (aka Structural Integration). Traditional medical massage focuses on deep fascial work to the area of pain and to the surrounding area. Rolfing looks at the body as a whole series of connections and realigns them over the course of 10 focused sessions. I try to be fluid between those two approaches to provide both immediate relief of pain, and a long term solution to it.

Making the Leap to Private Practice

While I was working at Providence, I was slowly building my own private practice at a rental studio in Union Square. As it grew, I added my rental days to my practice and let go of shifts at Providence one by one. At around the 3 year mark I made the scary choice to let go of my last two spa shifts and go fully private.

At this point I would have never imagined opening up my own studio for medical massage in new york city with multiple therapists.

My practice steadily increased over the next several years. I also got tired of sharing a studio space and being locked into the exact same schedule each week. Around the 6 year mark I had a 4-6 week waitlist for new clients. Several were actively pushing the idea of taking on proteges since they couldn’t get onto my schedule if they missed a session.

In order to create and design my own studio space, I needed to rent one. I started with a single treatment room, sub-rented from a psychiatry office. Since I was only planning on being there 4-5 days a week, I had some choices of what to the with the extra time. The safe option was to simply rent it out to another wellness practitioner. The less safe, but more lucrative long term option was hiring and training some therapists to work for me.

Obvs, I went with the less safe option. I started with 3 new therapist hires, including Shiho. All were talented and eager to learn. Shiho has grown into a truly fantastic massage therapist since and now has her own several week waitlist.

A year later we added a 2nd treatment room and hired several more therapists, including Laura and Evana. Both are now some of our best senior therapists!

By the 3rd year we had grown to the point of needing a third treatment room. I decided it was time for us to get our own lease. Mostly so that we could make the waiting area the same relaxed vibe as our treatment rooms 🙂 After looking at lots of spaces and neighborhoods, we decided on Fidi. I signed a 10 year lease and opened up our main studio in August 2016.

Thank you to all of your kind online reviews and referrals to friends and family! We love working with you and you’ve allowed us to thrive. And to grow into the premier studio for medical massage in New York City. When I started out in 2007 there simply wasn’t a place like this. Now we are part of a small but growing community of like minded therapists. There are only a few other studios in NYC that really focus on medical massage so far. But I notice a trend in the way massage is presenting itself in the area. And that trend is towards massage therapy as great medicine for pain and stress management!

We are proud to be continually growing with your support!

In case you missed it, we just opened up our 2nd location in midtown west!

We’ve got another 7 years on our Fidi lease and 5 on our midtown studio 🙂 So we aren’t going anywhere and will continue to offer the best medical massage in new york city available. For many years to come.

The last 12 years have been quite the ride. Creating something that hasn’t existed before was daunting and there were lots of times when I worried that the whole venture would collapse. Thanks for proving my vision right and my worries wrong 🙂

It turns out that my gamble on offering a viable non-surgical and non-pharmaceutical solution to the pains many experience worked out!

Who knows…maybe in another 12 years my team of super talented therapists will sprout dozens of medical massage studios of their own around the city. Can’t wait to see what they come up with 🙂 – David